Radiation is something most people have heard a few times in their lifetime, and it’s usually accompanied by the dangers it can cause. Many parents will lather your visible skin with sunblock if you’re going to be outside in the sun for a long period of time to protect you from the sun’s rays, which can damage the skin with a sunburn or skin cancer.

However, radiation actually takes many forms, not all of which are dangerous. Radiation is a form of energy that can be found all around us. In fact, the human body itself emits a form of radiation, which is emitted constantly as ambient heat, also known as body heat.

The Electromagnetic (EM) Spectrum is made up of seven main sections: Radiation is broken down into frequency, wavelength, and energy.

When looking at the electromagnetic spectrum, it is important to note that some areas of the spectrum give off radiation in the form of light, also known as photons. These photons, which is a stream of mass-less particles that are each traveling in a wave-like pattern at the speed of light. Photons are not in radio waves or microwaves, but they are found in the infrared light through gamma rays.

The EM Spectrum ranges from radio waves, which are the lowest energy and longest wavelength, to gamma rays, which are the highest energy and shortest wavelength. Visible light, which is what the human body can see freely, lies in the middle of the EM Spectrum. Radio waves are made up of the lowest amount of energy, while gamma rays are made up of the highest amount of energy. 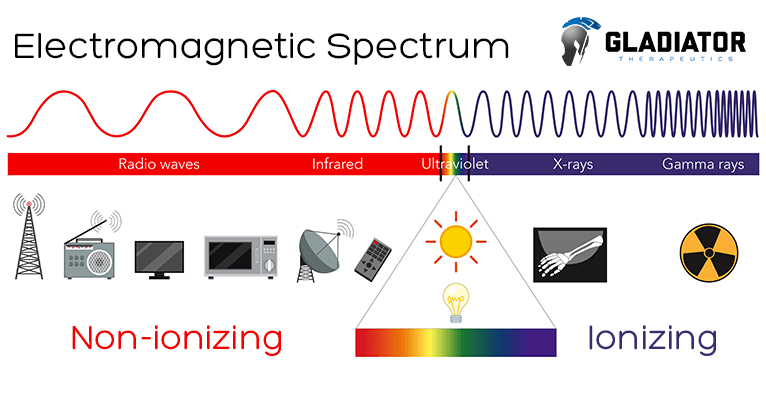 As mentioned, the EM Spectrum is made up of different degrees of radiation, and some of that radiation can result in biological changes if overexposed to them.

Non-ionizing forms of radiation consist of non-thermal, thermal, and some of the optical spectrum within the EM Spectrum. The lower the energy is, the less dangerous it becomes to the body. For example, radiation within the optical view of the spectrum, like a heat lamp, can be therapeutic. While a tanning bed can also be therapeutic, overexposure can become dangerous. With a heat lamp giving off infrared radiation, the human eye can see the energy in a form of light and feel it in a form of heat, the wavelength only penetrates into the top most layer of the body and excites the electrons, which is referred to as non-ionizing. Meanwhile, a tanning bed can offer similar therapeutic benefits, although the energy is higher, it can become more dangerous, and is known as ionizing. Due to the fact that a tanning bed uses ultraviolet radiation to mimic that of the sun, if overexposed to this form of radiation the body will become damaged or burned. Ultraviolet rays through gamma rays are unable to be seen by the human eye, however they can damage DNA and other cells within the body. This end of the EM Spectrum is the most commonly known form of radiation which most are taught to fear in the way that too much sun can damage your cells, resulting in skin cancer, or that the amount of higher radiation from a medical scan (ranging from x-ray to PET scan or MRI) can be dangerous on the cells of the body.

The Gladiator Therapeutics Far Infrared Device uses far infrared technology through our patented ceramics which are encased in a hypoallergenic silicone rubber. The Gladiator Device increases circulation throughout the body by breaking down the water molecule clusters within your blood into smaller molecule clusters, allowing for better blood flow. Better blood flow circulates healthy oxygen and nutrients into the cells and removes the wastes from the cells.